firewalld provides a dynamically managed firewall with support for network “zones” to assign a level of trust to a network and its associated connections and interfaces. It has support for IPv4 and IPv6 firewall settings. It supports Ethernet bridges and has a separation of runtime and permanent configuration options. It also has an interface for services or applications to add firewall rules directly.

Firewalls can be used to separate networks into different zones based on the level of trust the user has decided to place on the devices and traffic within that network. NetworkManager informs firewalld to which zone an interface belongs. An interface’s assigned zone can be changed by NetworkManager or via the firewall-config tool which can open the relevant NetworkManager window for you.

The zone settings in /etc/firewalld/ are a range of preset settings which can be quickly applied to a network interface.

To use the firewall, we can create rules and alter the properties of our zones and then assign our network interfaces to whichever zones are most appropriate.

How to enable FirewallD Simple NAT on your CentOS7

Check with your network interface. 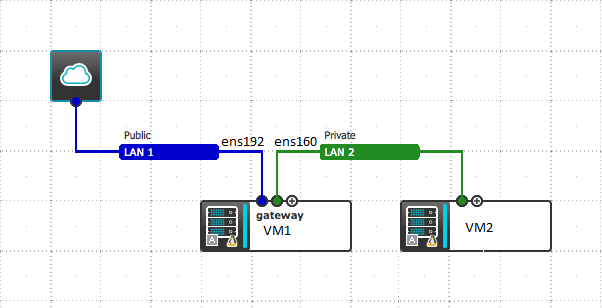 Check your firewalld current lists on your VM1

You can verify external zone

Login your Private Network server and configure the ens160 IP address as the gateway.